JavaFX's SceneBuilder is very useful, but I want to add a custom font to it. In the past, this has worked, though I have no idea how. Screenshot: 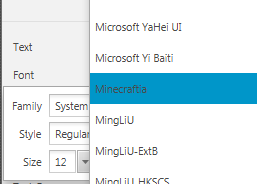 Since Java 8 JavaFX supports the @font-face rule that can be used to add fonts. As a first step the font file must be added to the application.

Once this is done the font can be defined in CSS by using the @font-face rule: in your case

check this blog and a answer for more information.