What are JavaFX, FXML and Scene Builder?

I am new to JavaFX, and am trying to do a project in it. In some tutorials they mention FXML. What is the difference between the two?

Please answer the above questions in simple language. If possible, provide me some good tutorials on how to use JavaFX.

FXML is a file format which JavaFX uses to create the layout of screens, though you can even code your user interface directly. Although its much more easy to create FXML files using SceneBuilder.

SceneBuilder is an application where you can drag and drop JavaFX UI components, and then tell your JavaFX program to use the fxml file(s) to display the user interface.

Here's a nice tutorial: Learn JavaFX And you can check out the JavaOne 2013 JavaFX based videos from the following link: JavaFX at JavaOne 2013.

Official Oracle Tutorials on JavaFX are highly recommended. These tutorials cover FXML, SceneBuilder, CSS and many other topics. As you are using NetBeans, using the Oracle tutorials should be straightforward as they all ship with NetBeans projects (just look for the project zip files in the columns on the right of each tutorial page).

I would suggest that you download JDK 8 and use JavaFX 8, and use the new capabilities of Java 8 in your JavaFX application like Lambda Expressions, etc to make your code compact and clean.

If you've heard of/used Swing before, think of JavaFX as its cooler, easier-to-use alternative and replacement (JavaFX is to replace Swing as java's main platform for desktop and internet applications, although both will continue to be supported in the foreseeable future).

FXML is nothing more than:

You can create your user interface directly by code, or in the fxml file with a .fxml postfix. E.g., my_ui.fxml

One of the most important tools in JavaFX applications development is the JavaFX Scene Builder (Snapshot below) It allows you to easily drag and drop controls (widgets) to create your UI in minutes: 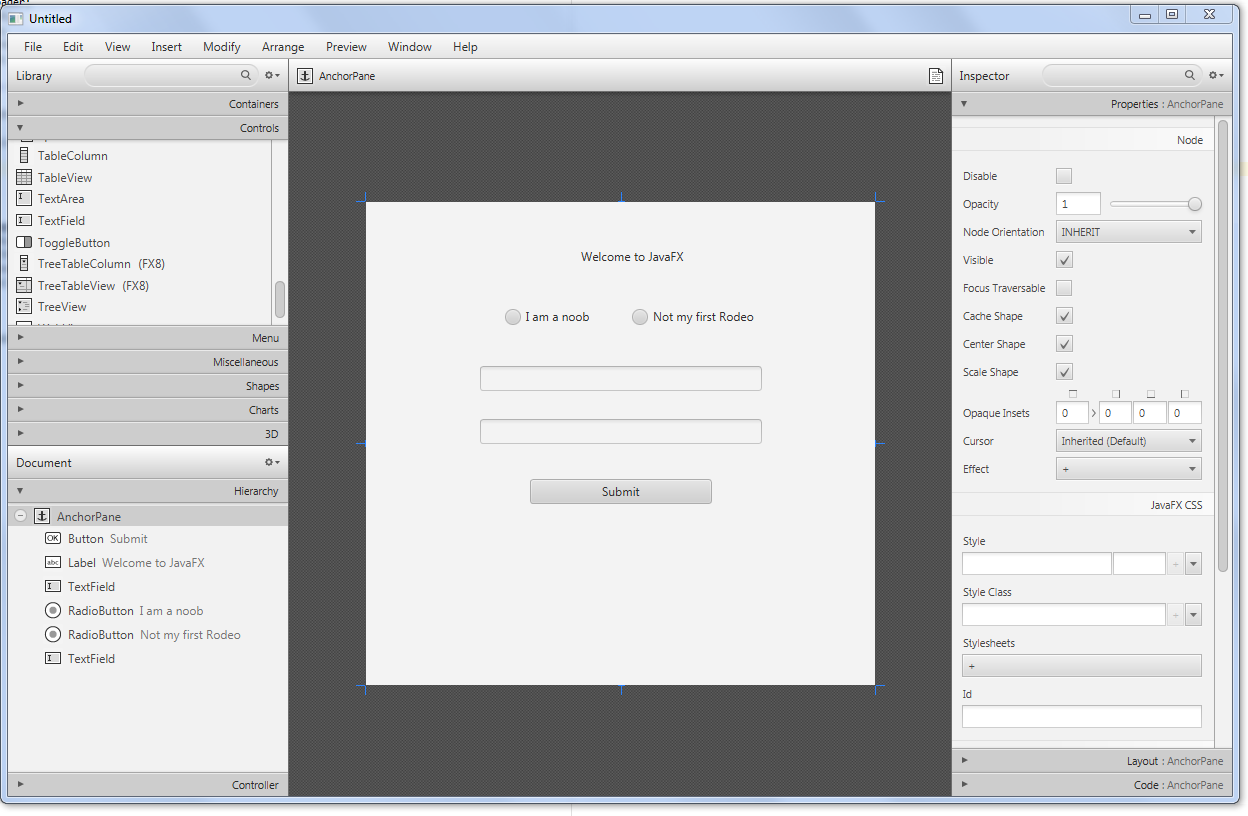 The code for this layout is generated automatically (in your_layout.fxml file) as you drag items into your layout.

Take a look at these cool tutorials on JavaFX:

Getting Started with JavaFX

JavaFX: The Next Generation in Java Programming