I am creating a GUI in a java fxml project using netbeans. I wanted to use bootstrap to style the gui but I have noticed that everything in javafx is prefixed with fx-. Is there still a way to get bootstrap to work anyway for my project? Does bootstrap even work with javafx?

Rendering Bootstrap inside a JavaFX WebView

Bootstrap is an HTML based framework.

So to use Bootstrap in JavaFX, use JavaFX's HTML rendering component WebView to render Bootstrap HTML/CSS and JavaScript.

Sample application performing a basic integration of Bootstrap and a JavaFX UI.

The JavaFX buttons on the top of the screen navigate around a WebView page to render different kinds of Bootstrap components. 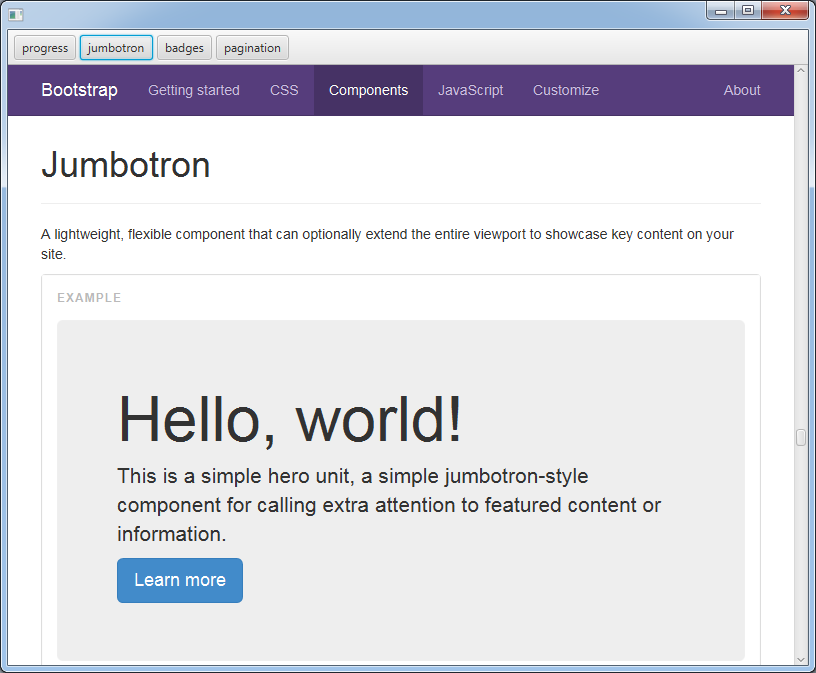 Is it possible to intercept button click events from a web view?

Yes. You can attach click handlers in Java code through the w3c DOM API access WebEngine provides. See the WebEngine documentation for details:

The WebEngine objects create and manage a Document Object Model (DOM) for their Web pages. The model can be accessed and modified using Java DOM Core classes. The getDocument() method provides access to the root of the model. Additionally DOM Event specification is supported to define event handlers in Java code.

The following example attaches a Java event listener to an element of a Web page. Clicking on the element causes the application to exit:

However, for me often is is easier to handle interfacing with w3c documents using JavaScript (specifically jQuery), rather than Java. Here is an example of issuing from Java code, a jQuery call to provide click handlers in a WebView.

Why not just port bootstrap.css to conform to the javafx naming conventions?

Still, it is possible to do the port (as linked in Philippe's answer), and that is what Takayuki Okazaki has created in his Fextile project: "Twitter Bootstrap like UI framework for JavaFX. Apply themes to your application just like Twitter Bootstrap via JavaFX CSS.". Don't expect an exact match with bootstrap in HTML, but it should allow your JavaFX controls which don't use HTML to have a pretty close look to what you would achieve with bootstrap in HTML.

You could also create a hybrid application, where some parts of the UI are from HTML with bootstrap and some are rendered from JavaFX controls using Fextile. If you applied such an approach to the sample application in this answer, then the JavaFX buttons "progress", "jumbotron", etc. would look like their HTML bootstrap counterparts, giving the whole application a more consistent look and feel.

Here is a Q&A (from the Oracle JavaFX forum post) on how to creating the Foundation style (so somebody can get a relative idea of what is involved for extending Fextile for additional Bootstrap style features). Note that the Q&A is a little old and since then a CSS analyzer has been added to SceneBuilder:

1) How difficult was this work?

No at all: the whole experience was very pleasant and very easy to do. This is my first JavaFX app (a map style editor with real time preview)

2) Was it very time consuming?

No: using the preview ScenceBuilder 1.1 the styles are updated on the fly - the SceneBuilder could do with a built in CSS editor, but that's only minor: the workflow was quite simple anyway

3) For a simple port do you think that you need any design skills at all, or could anybody have really done this who knows a bit of css/html/javafx?

Anyone can do this: my background is server side code - I don't do much in the way of front ends - I know JS and HTML very well but my CSS leaves a lot to me desired: so basically if I can do it ...

4) Was the difference between the javafx css syntax and the html css syntax a major pain or not really an issue?

Once I got used to it, made no difference although I do keep forgetting to add '-fx-' and the -fx-text-fill I always type as -fx-text-color ...

5) Similarly did a lack of a one-to-one correspondence between html document tags (e.g. the header tags) and JavaFX complicate this?

6) Will the upcoming rich text support in JavaFX 8 simplify (or make possible) more of these kinds of ports?

I need to have a look at this: as I said I'm a complete beginner with JavaFX so I'm still catching up on the current implementation.

The bootstrap styles would be really nice: a lot of people who I've showed the app to are quite amazed when I tell them its Java and not an embedded web app.

It's not a complete implementation of the bootstrap style but you can start with this css file: https://github.com/watermint/Fextile/blob/master/src/main/resources/fextile.css