I would like to know how can I load the second file inside the content space from the "Master" scene. And is that a good thing to do working in javaFX or is it better to load a new scene?

I'm trying to do something like this, but it doesn't work:

Thanks for the help.

Why your code does not work

The loader creates a new AnchorPane, but you never add the new pane to a parent in the scene graph.

Replacing the content children with your new vista. The content itself remains in the scene graph, so when you set it's children, you are also attaching them to the scene graph at the same time.

You might need to play around with layout (e.g. work with auto resizing layouts like StackPanes rather than AnchorPanes) to get the exact behaviour you want.

Rather than just adopting the quick fix, I would advise reviewing the simple framework linked below as that might provide you with a more general purpose mechanism to get the behaviour you want.

I created a small framework for swapping fxml controlled content panes in and out of a portion of the main scene.

The mechanism of the framework is the same as suggested in kithril's answer.

The framework seems like overkill for answering your question, and perhaps it is. However, I have found that the two most asked topic related to FXML are:

So I felt that a small demo framework was warranted for this case. 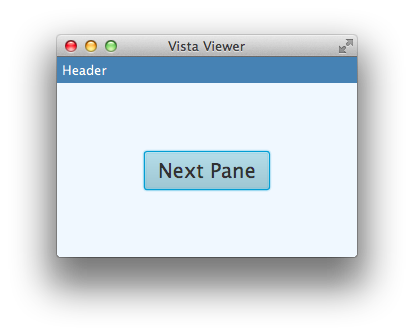 In the next screen, the user has navigated to the second vista, which retains the constant header from the main layout and replaces the original child pane with a new coral colored child content pane. The new child has been loaded from a new fxml file. 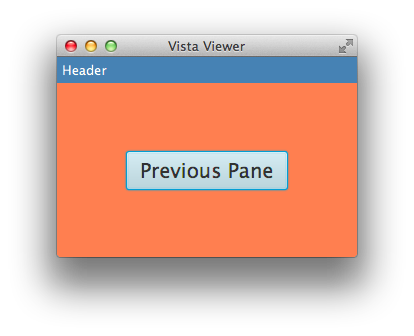 Looking for Something More Substantial?

A lightweight framework which is more extensive and better supported than the sample framework from this question is afterburner.fx.

Looking for Something Even Simpler?

Just swap out the scene root: Changing Scenes in JavaFX.

Animated Transitions and others: Switch between panes in JavaFX

Im not sure about how effective this is, but seems to be just fine and what's more, much simpler to methods above.

However Im not a java expert and quite new to programing so it would be good if someone experienced would evaluate it.

Now you get acces to your main Stage so anywhere in a program you can do something like that to change the scene: