The JavaFX 2 colour picker has a button that pops up a colour chooser pane like so: 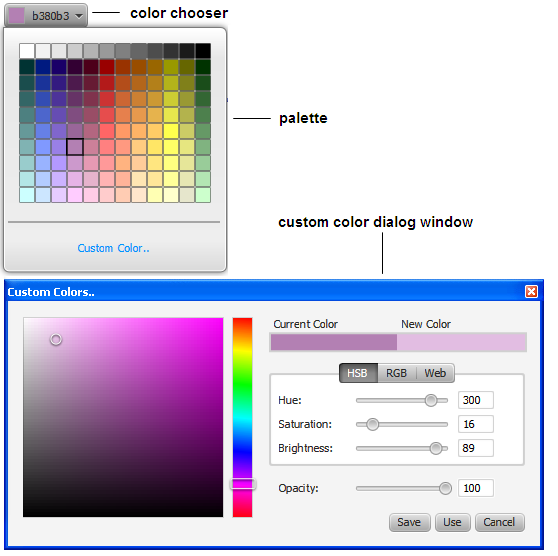 I'd like to do something similar, in that I'd like a custom pane to pop up when the button is clicked on and disappear when something else is clicked (in my case, a few image thumbnails). What would be the best way of achieving this? Should I use a ContextMenu and add a pane to a MenuItem somehow, or is there something else I should look at?

It's kind of difficult to do well with the current JavaFX 2.2 API.

Here are some options.

Use a MenuButton with a graphic set in it's MenuItem

This is the approach taken in Button with popup showed below's executable sample code. 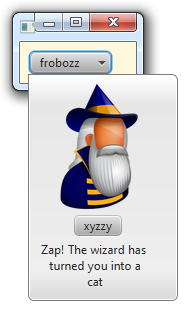 Take a look at how the ColorPicker does this in it's code.

ColorPicker extends PopupControl. You could do this, but not all of the API required to build your own PopupControl is currently public. So, for JavaFX 2.2, you would have to rely on internal com.sun classes which are deprecated and will be replaced by public javafx.scene.control classes in JDK8.

So, I think your idea to "use a ContextMenu and add a pane to a MenuItem" is probably the best approach for now. You should be able to do this by using a CustomMenuItem or setting a graphic on a normal MenuItem. The ContextMenu has nice relative positioning logic. A ContextMenu can also be triggered by a MenuButton.

Use a Custom Dialog

To do this, display a transparent stage at a location relative to the node.

Use a Glass Pane

You could look at how the anchor nodes in this demo are used to see how this might be adaptable to your context.

Is there a relevant update for this for JavaFX8?

There is not much difference of relevance for Java 8, in general the options are as outlined in this post based on Java 2.2 functionality. Java 8 does add Dialog and Alert functionality, but those are more targeted at use of dialogs with borders, titles and buttons rather than the kind of functionality desired in the question. Perhaps you might be able to start from the Dialog class and heavily customize it to get something close to what is needed, but you are probably better off starting from a blank stage or PopupControl instead.